How Long Do You Grill Chicken on a Gas Grill?

Grilling chicken is very straightforward, especially if you are using gas. Learning the answer to “how long do you grill chicken on a gas grill” is fairly simple too.

Grilling keeps your chicken moist and gives it a lot of flavors, so you will not need to use a smoker, make a complicated sauce or do much else to the meat. You might wish to use a chicken marinade recipe to give it some extra flavor, but that is up to you.

Set your gas grill up to indirect heat and then put the chicken breasts on the grill. Check back in about twenty minutes and flip them over. At this point, you might like to baste the chicken, either with some leftover marinade, if you have used an easy chicken marinade recipe, or with some BBQ sauce or another kind of sauce, if the chicken is not marinated. Keep cooking the chicken until it is white in the center.

Adding a sweet sauce to the chicken earlier would be a mistake because the sugar in the sauce would char and your chicken would end up black on the outside which is not the most appealing way to serve it.

Chicken breasts will take about forty minutes to cook over indirect heat, and the easiest way to provide this kind of heat is to turn on both burners, close the lid, and let your grill heat up to 400 degrees F, then turn one burner off and put the chicken on that side. Put the lid down again. It will then cook slowly enough for the inside to cook fully without the outside burning. 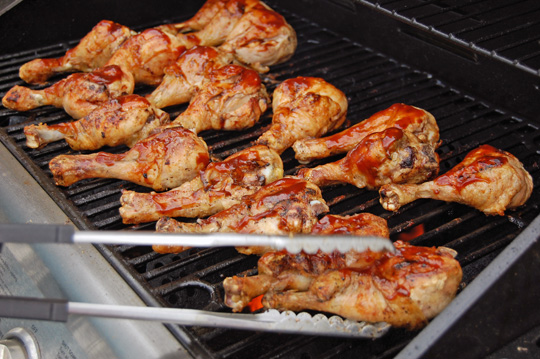