This mouthwatering dish is made by soaking your chicken overnight in a tasty Greek yogurt marinade. The marinade features onion, lemon juice, garlic, ginger, and garam masala, so you can imagine how flavorful it is. Allowing the chicken to marinate for such a long time really infuses it with the aromatic flavors and gives it a truly special taste. 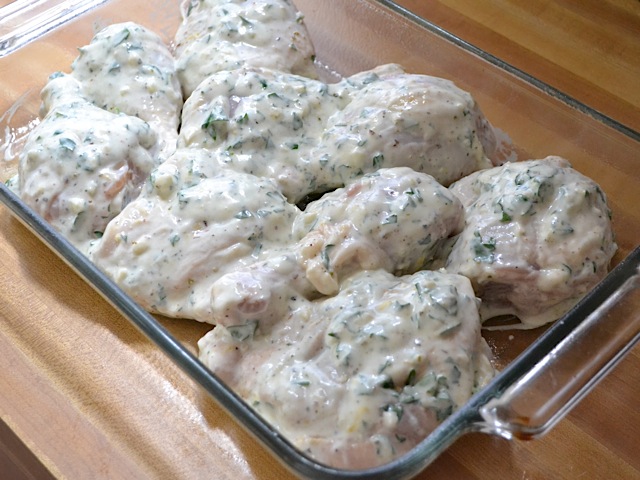 The recipe also includes directions for making a cucumber salad to serve on the side. Although you can omit that if you want, it is included here because it goes so amazingly well with the chicken. Also, you might wish to serve pita or naan bread with this, to make it a full meal. The cucumber salad is cooling and refreshing, which is the perfect contrast with the spiced chicken drumsticks. Without marinating, this meal simply would not be the same. The drumsticks would seem bland when served with the creamy cucumber salad, whereas using the marinade really livens them up and gives incredible results.

Use this marinade if you like Indian spices and if you want to make your chicken super-delicious. This is a nice marinade to use if you have friends coming over for a barbecue and you want to make something slightly different for them. They are sure to adore the flavors in this marinade because they permeate right through the meat.

Summary: This fusion marinade combines Greek yogurt with Indian spices, to bring you a truly mouthwatering flavor experience. Chicken drumsticks have never been so easy to prepare or exciting to eat.

For the Cucumber Salad:

Chop half the onion and thinly slice the other half.

Add the chopped half to a blender, along with 3 tablespoons of the lemon juice, the garlic, and ginger.

Puree until smooth, and then transfer to a bowl and stir in the garam masala, Greek yogurt, 2 teaspoons of salt and a teaspoon of pepper.

Add the chicken and toss to coat, then cover and refrigerate for at least 8 hours, or up to 24 hours.

Preheat the grill to medium.

Remove the chicken from the marinade, wiping off any excess.

Grill it for about 12 minutes or until cooked through, turning occasionally.

Combine the cucumber, cilantro, sliced onion, oil, and remaining 2 tablespoons lemon juice in a bowl and season with salt and pepper.

Serve the chicken with this cucumber salad, and also some pita or naan bread if liked.

This is what chicken drumsticks look like after you have marinated them or applied a rub. In the picture they are still raw but they will gradually cook to golden brown perfection, and the flavors from the marinade will stay clear and strong. Feel free to adapt any chicken marinade recipe. You can see the garam masala on the chicken, but also some finely chopped herbs which do not feature in the recipe. This could be mint, since that would be beautiful with the Greek yogurt, so add some mint to your marinade too if you want.

Marinade for Chicken Kabobs with Herbs

Marinade for Chicken Kabobs with Herbs