There are many different ways to make a traditional lasagna. What is traditional in one family may seem a bit strange in another. For example, an old-school Italian family traditional lasagna might include making homemade lasagna noodles. Other “traditional” recipes will insist on Italian sausage instead of ground beef and many other variations. If you are looking for just the basics browned ground beef, spaghetti sauce, cottage, and mozzarella cheese is all you really need. 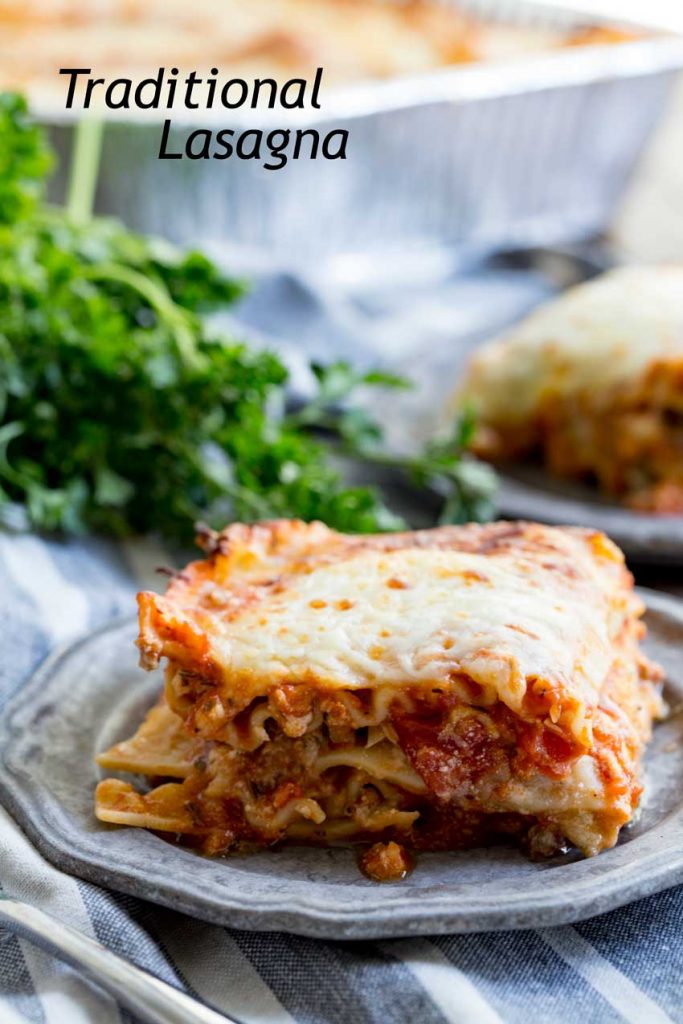 Cook lasagna noodles according to package directions, since you will be baking them as well al dente is fine. Brown your ground beef drain oil drippings then add your favorite spaghetti sauce.

Spray or oil a 16×9 inch baking pan then begin layering above ingredients. Most people begin with noodles; however, a thin layer of sauce is acceptable as well. Layer your ingredients noodles, cheese, sauce, sprinkle mozzarella, and then begin again. On the final layer, use the majority of your mozzarella cheese. Pop in the oven and bake at 350 for about 45 minutes, give or take depending on your elevation.

This lasagna recipe is super easy to prepare even when on a strict budget. Here are a few more acceptable yet optional ingredients you might want to consider; mushrooms, Italian seasoning on ground beef, cheddar cheese mixed with mozzarella and white sauce.

The History of Pasta

If you want to learn how to make a traditional lasagna because you enjoy authentic Italian food, you might be interested in the history of pasta. This staple Italian food is famous all over the world. Pasta comes in many shapes and varieties and it is eaten in Italy as a “first course” (between the appetizer and the entree).

Pasta can be plain like penne or spaghetti, filled with tortellini or ravioli, or hollow tubes that you can stuff yourself. “Lasagna” is the word for thin pasta sheets, although this word now refers to a finished lasagna, not just the pasta. Pasta can be dried or fresh and it can be made with eggs or without them. The word pasta derives from the Latin word pasta, meaning dough pastry cake, and it was first used in the late 1800s.

Fried dough sheets were fried as far back as the first century, and a lasagna recipe dating back to the second century consisted of wheat flour and crushed lettuce dough sheets which were flavored with spices and fried in oil. A meat-stuffed dough sheet recipe dates back to an early fifth century cookbook. Although these recipes are lasagna-like, they do not feature pasta.

Legend has it that Marco Polo imported pasta from China. It is believed by some that Marco Polo brought rice flour pasta out of China in 1295. This was used at the time to make Chinese dumplings. Now known as soft pasta, this is used to make gnocchi, ravioli, and similar pasta preparations. The first real information about pasta dates back to the 1400s in Italy. It is fascinating to know the history of pasta while learning how to make a traditional lasagna.

A Beginner’s Guide on How to Make Lasagna

Baking Up Something Simple and Sweet: The Best 3 Ingredient Cookie Recipes

A Beginner’s Guide on How to Make Lasagna