If you are an Italian food purist this is not the recipe for you I break with the normal food conventions in this dish and expand upon the taste pallet to introduce this classic dish to a few new culinary friends. See one of the things I am constantly striving for in my sites is an angle that is new and fresh.

Now this isn’t to say I don’t respect traditional forms of cooking and don’t serve up some classic dishes the way they were intended. I am just saying I like to stretch the envelope of the food experience and say what if they had done this. Now most times it works as I have a very good understanding of how herbs, spices and ingredients combine and work together, but I too have my occasional flop that just falls short (those don’t make it to the sites). But when I get that look in my guys’ eyes I just know hay we have a winner and we have to share it with all of you.

The following is just such a recipe. It is similar to a family favorite I make called fried scetti but it is different and is most like a traditional spaghetti carbonara recipe with a few tweaks. One I use pancetta or ham in place of the bacon and two I add a three cheese combination for an extra cheesy delight. Now as I have sometimes been criticized in the past for being a bit heavy on the cheese if you feel this recipe is a bit too cheesy for your liking cut back on it a bit just try and maintain the ratios of the three cheeses. Now with that said a recipe is always just a starting point modify it to your liking if you are one way or another on any individual ingredient. It is not the law you can go over 65 and no ticket will be issued. 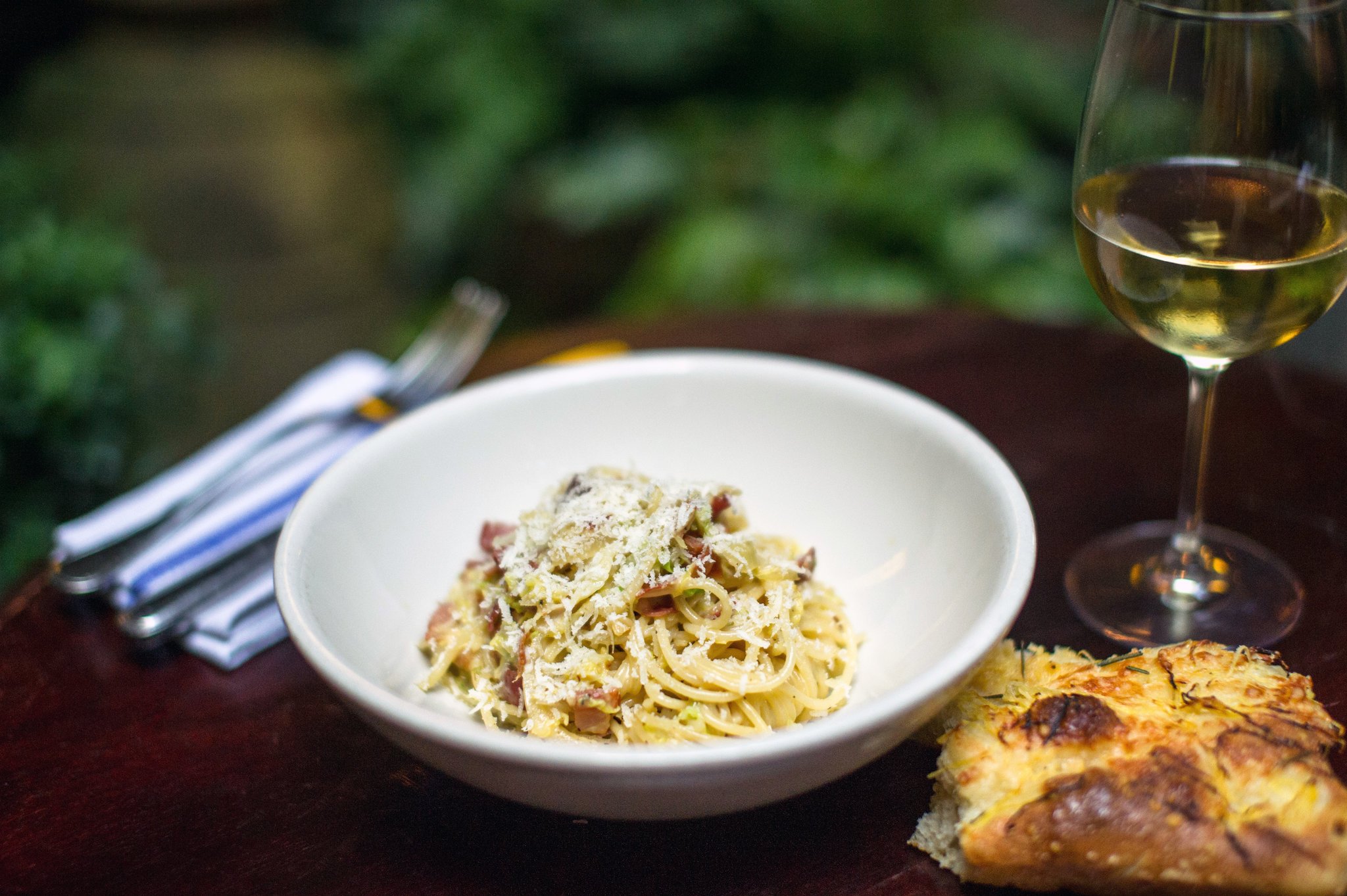 This is a modern twist on a classic Italian dish and as such introduces it to a few new but similar tastes to the classic but builds upon it.

In a stockpot bring three quarts of salted water to a boil, add a few drops of oil to this and when a rapid boil is going add the spaghetti whole to the pot and give a stir, stir occasional to prevent clumping.
Cook until al dente about ten to fifteen minutes, then drain in a colander and set aside (retain some of the water if needed for later).
Start by cutting the pancetta or ham, into ½ inch cubes.
Place in a skillet with a bit of olive oil and brown slightly, then add the garlic and sauté for a few minutes but do not let burn or brown to this toss in the mushrooms if using and lower heat and cook until tender.
When this is done add the spaghetti to the skillet and toss so that all the pasta is coated with the meat and oil.
In a glass bowl combine the cheese and egg together with a whisk until void of lumps.
Reduce heat to its lowest setting and slowly add the cheese and egg combination over the pasta and toss continually until the egg is cooked off.
The sauce should gradually become a liquid like cream (if it is necessary add a bit of the pasta cooking water if too thick).
Use salt and fresh ground pepper to taste.
Serve immediately on preheated plates.

Although most spaghetti carbonara recipes use just one or two cheeses and also usually use bacon I wanted to offer up a slightly different twist on this classic Italian recipe and make it a bit more Americanized by using ham and three kinds of cheese. Now I know the purest out there are already waiting to leave me nasty comments but if you follow my sites you know I don’t get hung up on well it’s been done this way for hundreds of years stuff. I am a food inventor and I like to play around with the taste pallet and invent new and wonderful recipes that have the spirit of any ethnic cuisine but have a new twist on them.

The Best Bechamel in the World